Oprah Winfrey apparently has expensive and fancy taste when it comes to real estate, which isn’t really surprising considering the fact that she has got the billions to afford them. Her blooming real estate collection includes the $90 million Promised Land mansion in Montecito, California which is among the most expensive houses in the world and it is indeed a sight to behold. Just recently she splashed $14 million on a mansion located on the slope-side of Mountain Village, Telluride that looks too awesome to be real like something from the Disney fairy tales.

In 2014, The Queen of media dropped $11 million on a 60 acre landed property in Mountain Village on which she plans to build a new home and the purpose of her latest purchase is to serve as an abode as she oversees the construction of her new home, because as a billionaire when you have dealings in a town where you don’t own a house, you simply buy one instead of lodging in a hotel.

However, as important as the location of the new house is, it is more likely that it was the incredible features of this house that won her heart rather than the location. The 8, 700 sq ft mansion sits on a 3.25 acre land and has 5 bedrooms, 6.5 bathrooms, an office, heated driveway with motion sensors and a guesthouse.

Dubbed “the smart house”, the mansion comes complete with a high-tech feature that allows the plants to be watered millions of miles away via an iPad. Perhaps the most jaw-dropping feature of this house is the 56 foot long, 1,600 bottle capacity wine cellar or in this case the “wine mine” designed as a semblance of a real mining tunnel with a riding steel cart from which you can journey through as sound and light effects in the background gives you the feeling like you’re in the real thing. Beat That!

Another stunning feature in this mansion is its 35 foot high, 45-foot long walkway which cost $140,000 to construct and can be accessed via one of its rooms. So after a nap, Oprah can take a stroll into the woods without touching foot on ground as she sips on one of the wines from her mine and when she’s tired of standing she can sit by the walkway’s gas fire pit while enjoying the breathtaking views of her surroundings which includes the San Sophia Mountain Range. This is “the life”.

There is also a private steel funicular railway for four which costs $240,000 and with it, Oprah’s guest who might happen to be ski lovers can transport themselves to the ski slopes. The interiors of this mansion came completely furnished with unique features, its wide windows give access to natural light as it offers awesome views from almost every angle. A number of crafted African arts can be seen all over the house with the living areas having the most number. Outside the media mogul’s new bedroom is a $150,000 fiber-optic light-changing glass bridge above the living area which gives access from the room to other parts of the house, its bathroom features a stand-alone $70,000 limestone bathtub that has the capacity to regulate water temperature.

Other features include a game room with a pool table, projection screen and a wet bar, a gym, sauna, mud room, and a large chef kitchen. The hot tub room serves as a good substitute for a pool as its retractable windows offer views of outside from wherever you look and a large tub that can carry up to 7 people.

See Also: The Chateu Louis XIV- The Most Expensive House Ever Bought

Oprah bought this incredible house from tech executive Bob Wall, who reportedly spent 5 years to construct. If Oprah opted for such an amazing and pricey mansion just for an abode to facilitate the supervision of her own building, then we can only imagine what the mansion would look like when construction is done. Fingers crossed it would come with more incredible features than this.

View Photos Of Oprah’s Mansion After The Cut, You Can Take As Long As You Like 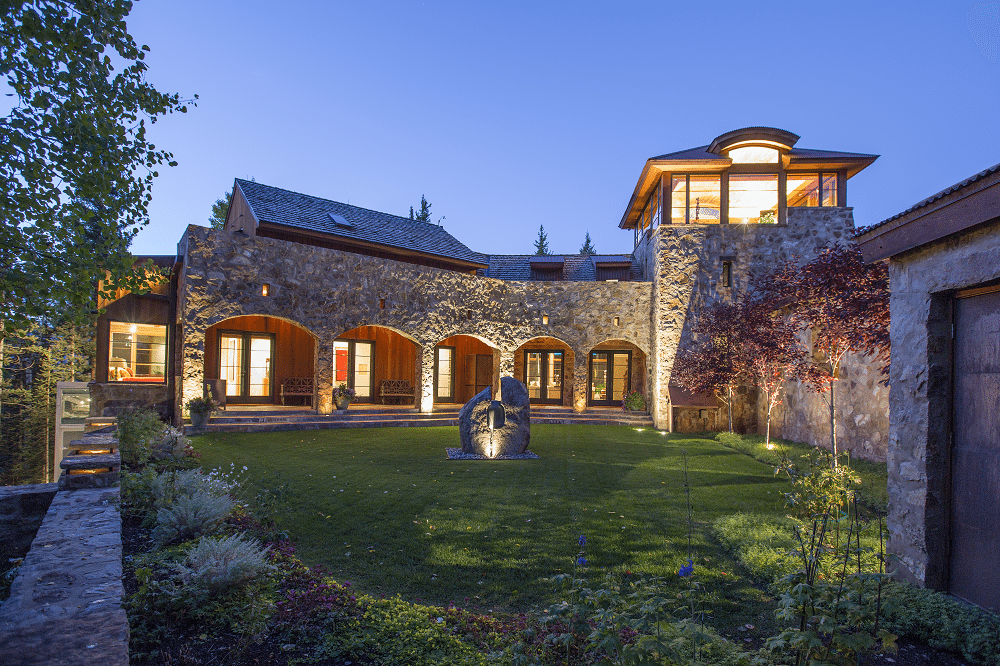