JustRichest Biography and Celebrity Profiles, Full Net Worth, Movies & TV
Home Celebrities Does Stephen King Have A Wife, Who Are His Son & Family... Stephen King is an American contemporary horror and supernatural fiction writer who has sold over 400 million copies of his materials, making him one of America’s most successful authors. With a career that spans over 5 decades, Stephen King has earned over $450 million from his works.

A plethora of his books have been adapted into movies, most notably “The Shining”, “The Shawshank Redemption” and “Carrie”. He also publishes under the pseudonym Richard Bachman. One of the world’s highest paid authors, King’s annual earnings can peak as high as $45 million. His net worth is estimated at over $400 million. Here is all you need to know about Stephen King’s career and wealth.

Stephen Edwin King was born on September 21, 1947, in Portland, Maine. Young Steve at the age of 2 was left to the sole care of his mother after his father abandoned the family. His mother managed through hardscrabble jobs to fend for him and his older brother, David.

As a teenager, King became a frequent reader of Entertainment Comic’s horror fiction and began writing his own books for fun. He soon began publishing his works in his brother’s newspaper known as Dave’s Rag. His first independently published book was titled “I Was a Teenage Grave Robber.” King won his first of many accolades as a teenager. It was a Scholastic Art and Writing Award. After graduating from Lisbon High school, King worked a number of menial jobs including as a gas pump attendant and janitor to afford college tuition. He attended the University of Maine where he wrote a column titled Steve King’s Garbage Truck for the school newspaper. King graduated in 1970 with a Bachelor of Arts in English.

Fresh out of college and without a job, King began earning from selling short stories to men’s magazines. He also began working on ideas for novels. A year later in 1971, King married his wife Tabitha Spruce and landed a teaching job at Hampden Academy, Maine. His salary was $6,400.

Who Are Stephen King’s Wife, Son, and Family?

While Stephen was studying at the University of Maine, he met a female novelist and philanthropic activist: Tabitha Spruce at the university’s Fogler Library whom he fell in love with over time. The two writers went on to formalize their relationship by getting married on the day after the new year of 1971 (2nd January 1971). Their marriage has been blessed with 3 children: a girl named Naomi Rachael born on June 1, 1970, and 2 boys: Joseph Hillstrom born on June 4, 1972, and Owen Philip the youngest of the 3 born on February 21, 1977.

Stephen King and his wife Naomi Rachael being successful writers had the genes passed down to their children. Joseph Hillstrom who goes by the pen name Joseph Hill is towing the of path his parents. Hill has to his credit, 4 books: Heart-Shaped Box, Horns, NOS4A2 and The Fireman. He has also published two collections of short stories titled 20th Century Ghosts and Strange Weather. Joseph Hill is definitely set on the right path to attain great heights as a writer. He holds the Eisner Award-winning author of the comic book series Locke & Key and with many more captivating works yet to come from him, he is set to make a name for himself as a famous writer as well as the son of famous writers.

For a very successful author with an estimated net worth of over $400 million, he sure has an interesting taste for his abode. Stephen King and his wife live in a mansion with a wrought-iron fence, spider webbed front gate topped with bat decorations. The house is hard to miss with its expressive blood-red paint on a 19th-century Victorian styled mansion in Bangor on West Broadway Street. He is the most famous celebrity in Maine and that automatically confers on his house, the title of the most famous house in Maine.

King began writing his first novel, Carrie in the early 1970s. Discouraged by its slow progress, King abandoned the manuscript in a trash can but resumed writing following encouragement from his wife. In 1973, The book was accepted by publishing house Doubleday and he received $2,500 upfront pay. He was later paid $400,000 for the rights to publish the book.

Also in 1973, King who was 26 years old at the time was paid just $2,500 for the rights to adapt the book into a movie. Released in 1976 with a budget of $1.8 million, Carrie grossed almost $34 million at the box office. The movie became one of the few horror movies to be nominated for multiple Academy Awards. 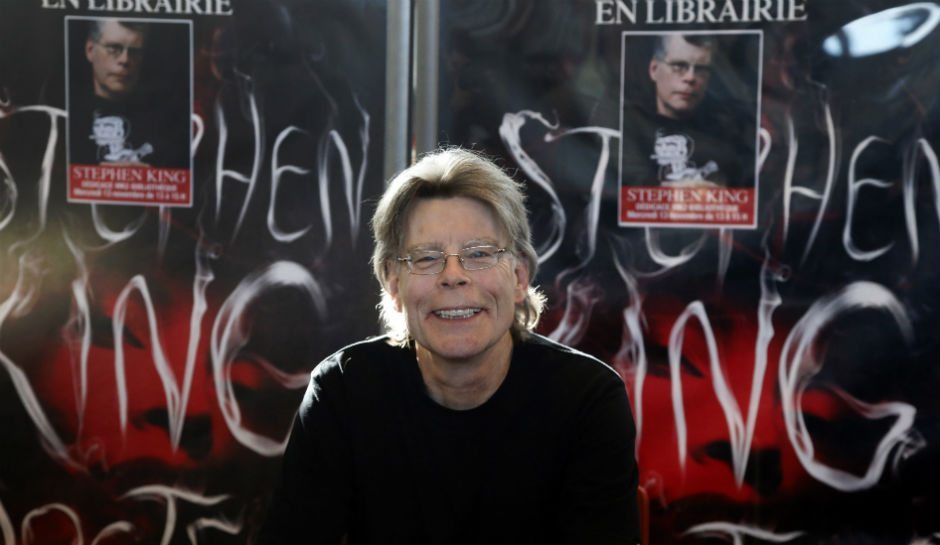 Other Successful Works of Stephen King

An incredibly prolific writer, (he sets a target of reaching at least 1000 words every day!) Out of concern that the public won’t accept two books in a year from an author, King chose to pen under the pseudonym, Richard Bachman. In 1996, HBO paid $1.5 million for the rights to his novel “Rose Madder”

Some other successful movies based on his works include; Misery (1990), The Shawshank Redemption (1994), and more. King has also starred in some of the movies adapted from his books.

Earnings By The Year

For the first time, Forbes tallied Steve’s earnings in 1999 estimating his annual earnings at $40 million. Part of the earnings was from his memoir “On Writing” which was published in 2000. He surfaced on Forbes list in 2008 with annual earnings of $45 million. In 2011, Universal Pictures canceled their plan to adapt King’s book series “Dark Tower”. Regardless, he still went home with $28 million in annual earnings. Stephen King has since then been a regular on the Forbes list. Between 2012 and 2016, King amassed a cumulative pretax earning of over $110 million.

Stephen King joined the list of celebrity death hoax victims, he was hit frontally and wished eternal rest in the land of the dead when a fake Facebook page with the name as ‘R.I.P Stephen King was created and attracted over 1million likes. The ‘About page’ tried to give a believable account of the writer’s demise. The fake page read:

“At about 11 a.m. ET on Sunday (January 07, 2018), our beloved author Stephen King passed away. Stephen King was born on September 21, 1947, in Portland. He will be missed but not forgotten. Please show your sympathy and condolences by commenting on and liking this page.”

Thousands of his fans and sympathizers took to the page to express their heartfelt condolences on his passing on. However, a handful of others held the news in disbelief especially as no major American reporter carried the news other than the Facebook page.

On January 8, 2018, a representative from the author officially debunked the death rumors and confirmed authoritatively that the world-famous author is still alive and well. “He joins the long list of celebrities who have been victimized by this hoax. He’s still alive and well, stop believing what you see on the Internet,” the family rep said.

Gladdened by this news, many of his fans have since then expressed their anger and dissatisfaction with the page. The page has officially been taken down.

In his early life, King alongside his single mother and brother, David lived in numerous states including De Pere, Wisconsin, Fort Wayne, Indiana, and Stratford, Connecticut, before returning to  Durham, Maine at the age of 11.

As a young child, Steve witnessed the death of a close friend who was hit by a train. While he had no memory of the event, commentators speculate that the early experience may have psychologically inspired his dark works. Stephen himself has never made mention of the experience, avoiding it in his 2000 autobiography “On Writing.”

While writing the autobiography in 1999, King was involved in an accident that left him with broken legs and hip. He underwent 5 surgeries in 10 days. King’s lawyers purchased the van that hit him at $1,500. The van was destroyed at a junkyard before King had the chance to fulfill his plans of smashing it with a sledgehammer. King is not only good with the pen but also with the guitar and with his voice. Together with fellow literary stars like Barbara Kingsolver, Amy Tan, and Dave Barry, he sings in a band called Rock Bottom Remainders. Proceeds from their shows are donated to charitable causes.

He is a Democrat. He supported Barack Obama and greatly opposes Donald Trump. During the 2016 race to the white house, King frequently took to his Twitter account to tongue-lash the real estate billionaire.

After his mom’s death in 1974, shortly after the release of Carrie, King became an alcoholic. He is an avid fan of the Boston Red Sox.