Matt Damon’s Movie Career Earnings And Facts About His Family Matt Damon is an American actor, screenwriter and film producer. He has worked his way up the ranks of Hollywood’s best with numerous awards to his name from Oscars to Golden Globes and BAFTAs.

Being a box office darling, his movies have grossed over $3 billion and $6 billion respectively at the domestic and global box office. Thus, it is only normal that Damon is one of the highest paid acts in the business.

Matthew Paige Damon was born on October 8, 1970, in Cambridge, Massachusetts. Unlike some Hollywood actors who came from nothing, Damon was born into affluence, his father was into the real estate business and finance while his mother was a professor. His parents divorced when he was just two years old and Matt and his older brother were raised by their mom for the rest of their childhood.

When Matt was 10 years old, he met a certain Ben Affleck who lived in the same neighbourhood as him. Both became best buddies and attended Cambridge Rindge and Latin School where they both developed a passion for theatre and performed in many high school productions.

Following high school graduation, Damon enrolled at the prestigious Harvard University where he studied English and continued to participate in school theatre productions. In his freshman year (1988) when he was just 18 years old, Damon landed his first movie role in “Mystic Pizza” and later, in “The Good Mother”. He continued to land small roles and in 1992, dropped out of Harvard 12 credits shy of graduation to focus on his movie career. After 3 years of hard work, Damon finally grabbed the attention of Hollywood critics with his impressive performance in 1996’s war film, “Courage Under Fire” which starred Denzel Washington. For his role, Damon had to drop 48 kg worth of weight within 100 days.

Matt Damon’s net worth is estimated at about $160 million. Read on to see how he came to earn such amount of money.

Damon landed his big break in 1997; thanks to a screenplay he wrote together with Affleck while he was at Harvard. The piece originally meant for an exercise in his English class was adapted into a movie titled “Good Will Hunting” which propelled the duo to instant fame and success.

They sold the script in 1994 to Castle Rock Entertainment for $600,000. While the movie grossed over $225 million against a $10 million budget, it handed the duo their first Oscar Award for Original Screenplay. Meanwhile, the legendary Robin Williams who also starred in the movie got his first Oscar for Best Supporting Actor.

That was only the beginning of more success to come for Damon. He followed up with a critically acclaimed performance in “The Rainmaker” (1997) and “Saving Private Ryan” (1998). The later of which was an instant box office hit.

His success continued through to the new millennium when he began earning 7 figures per role. Also, he began attracting worldwide recognition thanks to films such as the star-studded “Ocean’s Eleven” (2001)  and “The Bourne Identity” (2002). Damon continues to earn big starring in subsequent sequels of both movies. “Jason Bourne”, the 5th instalment of the Jason Bourne film series grossed $415.5 million against a $120 million budget. In recent times, Damon has earned 8 figures for movies such as “Elysium” (2013), “Interstellar” (2014), and “The Martian” (2015). The later was a massive commercial and critical hit, grossing $630 million at the box office and contributing hugely to the $55 million Damon earned between June 2015 to June 2016 which made him the third highest-paid actor in the world behind Jackie Chan and Dwayne Johnson. The movie was rated by the American Film Institute among the Top 10 Best Movies of 2015. For his role, Damon earned a Golden Globe Award for Best Actor.

READ   Who Is Verne Troyer, Was He Married and How Did He Die? 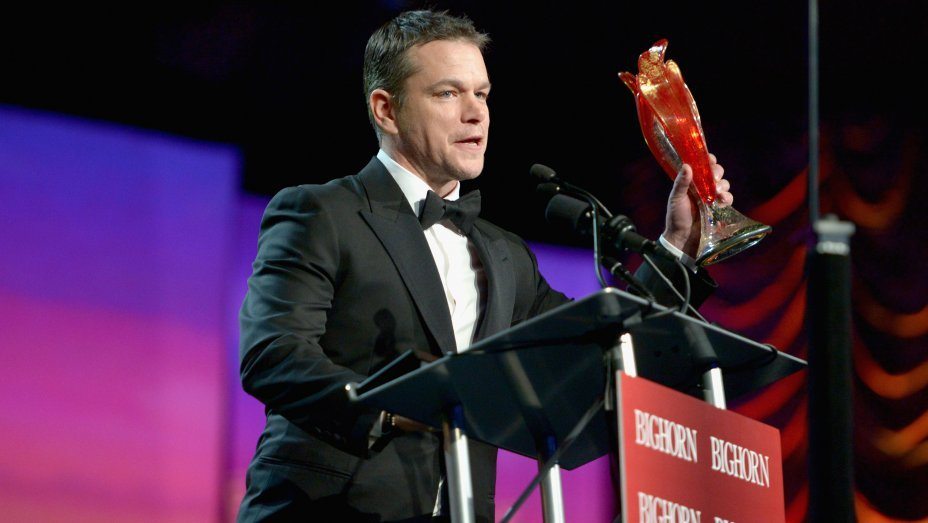 In addition to acting, Matt also earns big as a screenwriter and producer. He owns a production company called Live Planet alongside his buddy Ben Affleck and two other film producers. In 2012, he earned $9 million from behind-the-camera endeavours. His 2016 movie “Manchester By The Sea” which he produced grossed $34.9 million from $8.5 million production cost and was nominated for a handful of Golden Globe Awards.

Matt is one of the most charitable men in Hollywood. He donated all of his paychecks from his advertising gig for TD Ameritrade to charity. Meanwhile, he has endorsed other brands like Verizon and Nespresso.

Matt Damon is one of the most respected actors in Hollywood. He may make headlines for his incredible movie feats but he has never been a tabloid fodder. Over the years, Damon has managed to keep his private life away from the prying eyes of the media. Sometime in 2003 while Matt Damon was filming a movie in Miami, he met Luciana Bozán Barroso at a bar. They became friends, then lovers and got engaged two years later. That was in September 2005. On December 9, 2005, they got married in a little private ceremony.

Rumours of a divorce have trailed this marriage for quite a while. Yet, the Luciana-Matt union has lived through it all.

Do you know about the fracas between Matt Damon and Jimmy Kimmel? It’s been covered extensively by popular media.

It started in the third season of “Jimmy Kimmel Live!”, Kimmel’s comedy show which hosts comedians, athletes, famous actors, musicians and other celebrities. Kimmel ended one of the shows apologizing to Matt Damon for bumping him. One of his producers found it hilarious and Jimmy got addicted and started doing the apology thing to Matt Damon every night.

Because the joke kept getting laughs and people found it very funny, he kept it going night after night. After a year of that, Matt Damon decided to respond. He got his chance when he was invited to 2006 “Live!” episode.

Following that, both men have tried as much as they could to embarrass each other, including that time when Kimmel was hosting the Emmys and Matt Damon made a surprise appearance onstage to taunt Kimmel about his loss of the award for Outstanding Variety Talk Series category to John Oliver of Last Week Tonight Talk Show.

Of course, they continued their beef, and it has lasted over 13 years now. Even though there are rumours that the entire thing is fake and that they planned it together to gain popularity, no one really knows for real if the feud is real or fake. What we do know though, is that it has been funny and interesting – for the most parts.