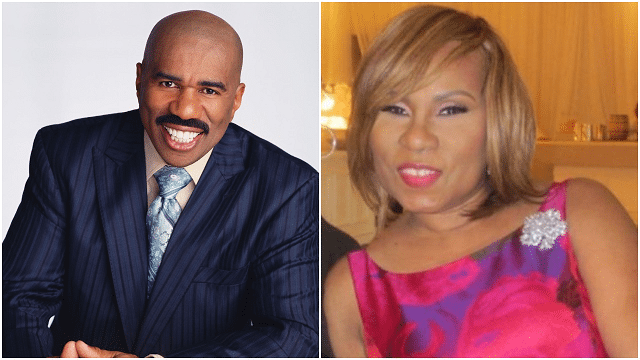 The world can never have enough of Steve Harvey and his hilarious jokes; the American comedian has become one of the top-grossing comedians in the United States.  While he is making the waves in the American television industry, little or less is known when it comes to his love life and affairs. It might interest you to know that he has been married three times and divorced twice. In this post, we are going to be unveiling all we know about his lesser-known wife Marcia Harvey. Read on as we take you through Marcia Harvey’s biography and other interesting facts you need to know.

Steve Harvey’s former spouse Marcia Harvey was born in the United States on January 22, 1955. She was raised in a middle-class African-American family and she is an American. There is no much information available for media consumption because Marcia hasn’t shared many details about her family, early life, and educational background. The much we could gather is that she has a bachelor’s degree in Chemistry; she reportedly worked in a departmental store located in North America. Marcia came into the limelight following her marriage to Steve Harvey.

Undoubtedly, you can say that Marcia is Harvey’s, first love. The pair met each other at a mutual friend’s party several years ago; at the time, Steve was trying to find his way around in the comedy world. After a few years of being in a romantic relationship; the couple sealed their love in a private wedding held in 1980. Their wedding ceremony was well-attended by close friends and family. After their wedding, the gorgeous couple welcomed their first symbol of love; lo and behold it was a set of twins Brandi and Karli. The two adorable daughters were born in 1982 and after eight years; they welcomed another child, this time, a son named Broderick Harvey Jr.

Who Was Her Husband – Steve Harvey?

Harvey completed his basic education at the Glenville High School situated in Cleveland, Ohio and also acquired his bachelor’s degree from the University of West Virginia. Prior to his comedy career, Steve trained as a boxer and also worked as a mailman as well as an insurance officer. He kicked off his comedy career in 1985 and has been active for over three decades. He has hosted several comedy shows including Its Showtime at the Apollo, Little Big Shots, Family Feud, and The Steve Harvey Morning Show, among others.

In addition to his comedy career, Steve is also an actor and has appeared on several blockbuster movies including The Fighting Temptations, Johnson Family Vacation, Madea Goes to Jail, and Love Don’t Cost a Thing. He has authored many books as well and some of his books include How to Find and Keep a Man and Act Like a Lady, Think Like a Man. Steve has equally received several accolades for his brilliant works.

While there is no perfect marriage, Harvey and Marcia had a blissful union and at some point; their relationship turned sour. Things began to fall apart between these amazing couple when Harvey decided to quit his job as an insurance officer in order to focus on his stand-up comedy career in the late ‘80s. Marcia accused him of infidelity and due to irreconcilable differences; the couple decided to go their separate ways and their divorce process was finalized in 1994.

After their divorce, Marcia Harvey launched a book she tagged Marcia: Eyes to the Soul. The book tends to bring to light Marcia’s experiences prior to her marriage to Harvey as well as her married life and post-marriage life. There is no news of her subsequent relationships. Although there were speculations that the gorgeous lady is currently married to a man named Larry Greene; however, neither Marcia nor Greene has confirmed their relationship till date. Steve, on the other hand, went on to marry Mary Shackelford with whom he had another son Wynton Harvey. The pair later divorced in 2005 after Mary had accused Steve of infidelity. He also married Marjorie Bridges in 2007; Bridges has three children from her previous relationship and Steve adopted them after their marriage.

Recall that Marcia Harvey has three children with Steve Harvey, a set of twin daughters – Karli and Brandi as well as a son, Broderick Harvey Jr. Her children are all grown up now and they even have grandchildren too. Meanwhile, one of her twins, Karli got hitched to Ben Raymond at St Regis Hotel situated in Buck Head in 2015. It was an awesome moment for the whole family; both Marcia and her ex-husband were present to share in their daughter’s happy moment.

Other Interesting Details You Need to Know