Is Don King Still Alive? What Is His Net Worth and Where is He Today? 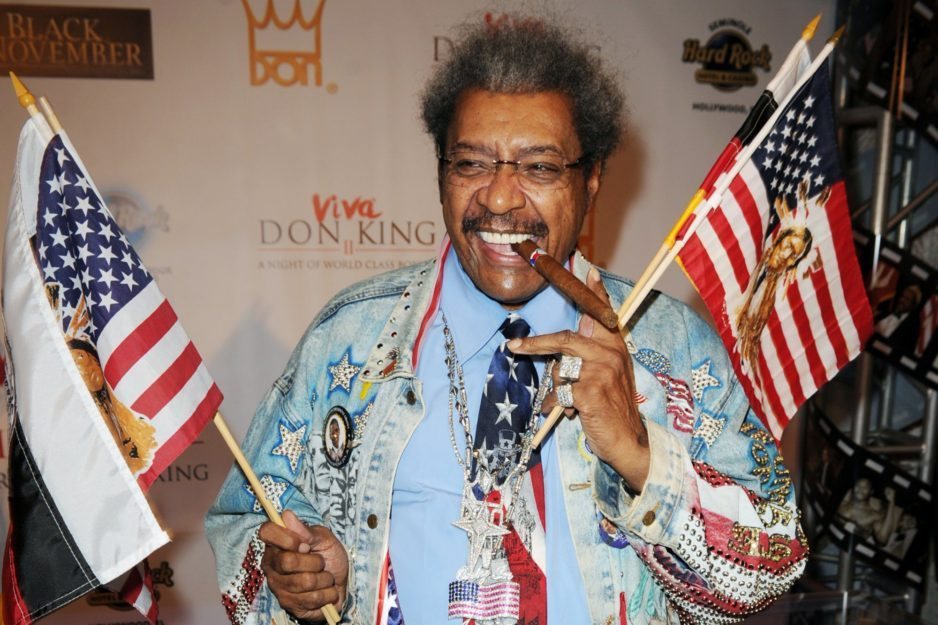 Don King is one of America’s most famous and richest boxing promoters. He is best known for promoting numerous pro boxers such as Muhammad Ali, George Foreman, Mike Tyson, and a host of others. By 2006, Forbes estimated that King had grossed $1 billion in boxing revenue by promoting 600 championship bouts within 33 years, earning $350 million in the process.

However, despite his success, King’s career has been plagued by a series of controversies mostly stemming from fraud. By the end of the decade following the new millennium, King’s career as a promoter had waned as a result of numerous sanction bodies and competition from other combat sports. Nevertheless, his Don King Production remains active while King banks from other business endeavours. In recent years, his net worth is estimated at over $150 million.

His Early Life and How He Began

Donald King was born on August 20, 1931, in Cleveland, Ohio. Born into a low-income family, King became involved with street life in order to make money. His love for illegal activities remained even after his mom moved the family to a middle-class neighbourhood with the insurance money she received from the death of his father who died from a steel plant accident.

King attended John Adams High from where he graduated in 1951. He later enrolled at Kent State University to study law. However, his love for the streets soon overshadowed his academic pursuits, forcing him to drop out before graduation. Cadillac Slim, (as he was known on the streets) then began running a nightclub and an illegal numbers game which soon proved profitable, but not without consequences.

In 1954, King shot and killed a certain Hillary Brown who was trying to rob one of his gambling shops, however, the court ruled it as a justifiable homicide. In 1966 King was arraigned after he beat his employee to death for owing him $600. He was convicted of first-degree manslaughter. After serving about 4 years behind bars, he was released in September 1971 and later pardoned for his crimes. A year after being released from prison, King sought to become a boxing promoter. He started by convincing Muhammad Ali to fight in a fundraising exhibition for a local hospital in Cleveland. Subsequently, he formed close ties with a couple of veterans in the boxing world and got to promote the much-anticipated fight between Ali and George Foreman in Zaire. King was able to beat his rivals to the job by raising the then-record $10 million fight purse thanks to his negotiations with the Zaire government. Ali emerged victorious in the bout that was labelled “The Rumble in the Jungle”.

In the following year, King took his business to the next level by promoting yet another blockbuster match, this time between Joe Frazier and Ali in Manila, Philippines. The bout dubbed “Thrilla in Manila” was ranked as one of the best in the sport’s history.

From then on, King’s fame and success only soared, he became notorious for his signature frizzy hairstyle and ostentatious display of character. Throughout the 1970s his Don King Productions became awash with champions like Salvador Sánchez, Wilfredo Gómez, and Alexis Argüello. The 1980s and 90s were no different, the likes of Mike Tyson, Julio César Chávez, and Evander Holyfield had most of their biggest bouts promoted by the King. Analysis of His Net Worth, Earnings, And Fraud Lawsuits

In his hay days, King bargained like a Don, a skill that kept him well in business. In 1979, he sold to a burgeoning HBO pay-TV its first bout. The company had King to thank for putting them in the lucrative business of boxing. In 1982, King sold a fight to them for $2 million. King went on to sell bout packages to closed-circuit, pay-per-view and broadcast television.

By far King’s most lucrative fighter was Mike Tyson. Their relationship began in the late 1980s. Upon Tyson’s release from his first prison sentence for rape in 1995, King was able to secure a 6-fight, $70 million deal for him with MGM Casino, Las Vegas. As part of the deal, MGM gave King $15 million worth of shares in agreement that he would sell it back when the value doubled. The deal paid off as King ended up with $30 million profit.

Tyson’s success in the ring during these periods also meant more money for King who’s annual earnings surged to $70 million. Unfortunately, their love story was only short-lived. Tyson sued King for cheating him out of millions, requesting for $100 million. King later settled with $14 million. However, it wasn’t the first time King was being sued for fraud by one of his boxers. In the 1980s, he forked out $1m to settle Tim Witherspoon and 6 figures each to Ali and Larry Holmes. In 1996, Terry Norris sued him for theft and underpayment, as a result, he paid $7.5 million to settle in 2003. His litigation woes seemed to have surged after his debacle with Tyson, King spent as much as $30 million on attorneys in just one year.

Against all odds, King was still a rich man and perhaps would have gone on to bank more if his Don King Promotions wasn’t forced to cut staff as a result of competition from other combat sports, the emergence of numerous sanctioning bodies and the dearth of boxing talents.

Income From Other Endeavors

While his career as a promoter waned, King had other money-making businesses to rely on. Back in 1998, he invested some of his wealth, precisely $700,000 to purchase “Call and Post”, a Cleveland-based African-American weekly newspaper. King also owns rights to other businesses, including a robot ad technology.

Where is Don King and What is He Doing Now?

There is no denying the fact that Don King made a lasting impact in the sport of boxing. However, all good things must come to an end and so the boxing promoter, who dominated the scene in the 70s, 80s, and 90s, experienced a noticeable career slump beginning from the late 90s. Part of the reason for that slump is King’s alleged unscrupulous practices. Several of the boxers he has represented, including the likes of Muhammad Ali, Mike Tyson, and Larry Holmes, have sued him for seizing much of the paychecks from the fights he got them. There is also his contractual requirement that any fighter who wants to go up against his boxers has no choice but to switch over to his promotion agency if they win.

Such stipulations made many to see boxing as corrupt and the sport has been trying to redeem its image. That means that there is no much room for people like King and his promotional agency has suffered. He has not been able to promote any real heavyweight fight in over two decades and his New York office at East 69th Street and Madiso Avenue is now shuttered. The once flamboyant promoter now works with a small staff out of the Florida town of Deerfield. He refuses to give up though and continues promoting some boxers. This is in the hopes that he we will one day discover a fighter that really wants to fight and is committed and dedicated like the older guys.

Some of the boxers that King currently promotes are Bermane Stiverne, who fought Deontay Wilder in 2017. Another is Christopher Lovejoy but the two men are embroiled in a contractual dispute. Back in 2017, Lovejoy signed a contract with King that required him (King) to get him some fights. These fights failed to materialize and so in Lovejoy’s estimation, the contract became void. The young man would go on to get some fights of his own and King never interfered. It was however when he was scheduled to fight a pay-per-view bout against Englishman, Dave Allen, in late 2020 that King intervened and stopped the fight, claiming that Lovejoy was still contracted to him.

Where is Don King and What is He Doing Now?

Deborah, popularly referred to as Debbie, is a recovered drug addict. She has had issues with drug abuse, and bipolar disorder, and this put her in trouble with the law. For instance, in August 2006, she was sentenced to 24 months supervised probation after she was caught in possession of cocaine. Deborah has since sought help for her issues and is currently helping other addicts through various initiatives. There is the drug/substance rehabilitation practice, Limitless Life Recovery, which is geared toward entertainers and athletes. Another is the National African American Drug Policy Coalition, a group that searches for alternative ways to handle drug offenders instead of incarceration. In March 2019, Debbie joined hands with Pepsi to launch the “Life is the New Cool Campaign” in Cleveland, Ohio. The campaign is aimed at tackling drug-fuelled suicides, mass school shootings and depression in the millennial generation.

The only King that has followed his father’s footsteps into the boxing industry is Carl King. King has his own management company, CK Sports and Entertainment Group, and manages several boxers such as Tim Austin, Owen Beck, Larry Donald, Nate Jones, Saoul Mamby, and Byron Mitchell. He has also managed some musicians including rapper Lil Lank. Carl works closely with his stepfather, he manages the boxers that the senior King promotes, and this has led to allegations of conflict of interest. He remains focused on his work though and in March 2019, was inducted into the National Boxing Hall of Fame.

Eric King is said to be a wealthy mortgage broker based in Dallas. Beyond this, not much has been heard of him in the media except unsavoury reports that he serially defaulted on his child support payments. According to the reports, Eric fathered a daughter, named Nathalie Carril-King, with his former girlfriend, Ana Carril-Grumberg, in the early 90s. He initially denied being responsible but later accepted paternity in 1992. He was then ordered to pay child support for her upkeep. The mortgage broker paid for some time but eventually skipped town to avoid paying. He was convicted for this and was ordered to pay $100,000 for his daughter as well as $344 monthly in 2000. He paid this figure for some time but by 2005 stopped paying. His erstwhile girlfriend had no choice but to take him to court again in 2008. This is the last of what was heard of the child support issue. So, one can assume that the man is now living up to his duties by his daughter