What is Brandy Norwood’s Current Net Worth and How Old is She? Meet Her Daughter American R&B singer, actress, TV personality, and producer, Brandy has sold over 40 million records worldwide, making her one of the best-selling female artists of all time. She has also achieved several feats in the movie industry like becoming the first black woman to play the Cinderella character. From music sales to touring, brand endorsements, acting, and reality TV proceeds.

Brandy has an estimated net worth of $12 million to $14 million, depending on the source. She is 43 years old

Find out more about the “I Wanna Be Down with you” hitmaker’s net worth, career, and personal life.

Her Early Life and How She Started

Brandy was born Brandy Rayana Norwood on February 11, 1979, in McComb, Mississippi. She is the sister of fellow singer Ray J and cousin to rapper Snoop Dogg. Raised in a Christian home and with a gospel singer/choir director father, Brandy began showcasing her musical talents in the church, making her first solo performance at the age of 2. Brandy’s parents have been in support of her music career since childhood.

To provide better prospects for her music career, they relocated the family to California, Los Angeles when Brandy was 4 years old. In LA, she enrolled at Hollywood High Performing Arts Center, began idolizing Whitney Houston, and became a frequent competitor at talent shows. 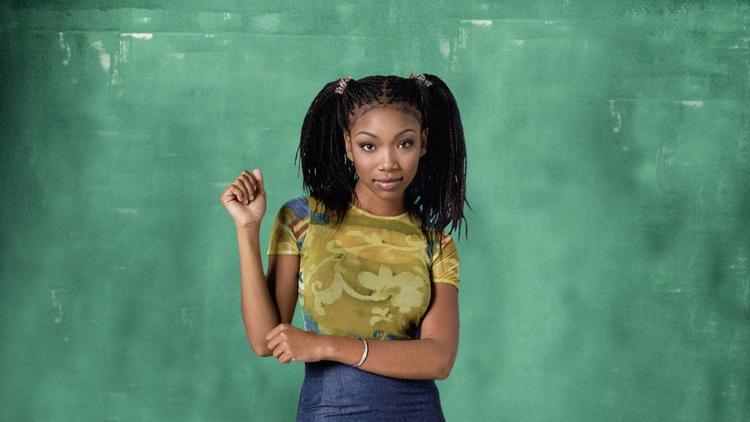 Shortly after rendering backup vocals for a teen group, Brandy landed her first recording contract at the age of 13 with Atlantic Records. As a result, she became homeschooled from the 10th grade to have more time for studio sessions. While working on her debut album, Brandy landed a role in the ABC sitcom “Thea” which was only short-lived much to the delight of Brandy who wasn’t so much enthused about acting at the time.

Analysis of Her Current Net Worth

Revenue from Record Sales Is the Biggest Source of Her Wealth

Following the release of her debut self-titled album “Brandy”, Brandy earned her big break at the age of 14! The album was met with greatly positive reviews. It produced two singles; “I Wanna Be Down” and “Baby” which were massive hits, each receiving platinum certification from the RIAA. Brandy sold over 6 million copies worldwide, earning two Grammy nominations for Best New Artist and Best Female R&B Vocal Performance for “Baby.” So, apparently, Brandy became a millionaire in her teens, however, being a minor, her wealth was managed by her parents.

Brandy rapidly grew in her career to become idols to the likes of Rihanna, and Ariana Grande. Her follow-up album “Never Say Never” released in June 1998 was even more successful. It produced 7 singles most notably, “The Boy Is Mine” ft Monica and “Have You Ever”. The former became the most successful duet done by female acts in the music industry. It also brought the duo their first Grammy Award. The success of the singles made the album, Brandy’s most successful, with over 16 million copies sold worldwide. In all, her body of work as a singer includes seven studio albums one compilation album, and one EP.

Brandy Has Made Millions of Dollars from Concert Tours

The American singer has always supported the sales of her albums through concert tours. Brandy supported her 1998 album by headlining her second concert tour and first world tour – Never Say Never World Tour.

What she generated from these tours may not be known to the public but it is clear they have added a significant sum to her net worth. For her contributions to music, Brandy has won 14 Billboard Music Awards, 3 American Music Awards, and 1 Grammy Award.

The Singer Has Also Made Good Money from Acting

After her debut album, Brandy returned to acting landing her own sitcom on UPN entitled Moesha. Moesha became UPN’s highest-rated show running for 6 seasons, between 1996 and 2001. In 1997, her idol Whitney Houston selected her to play the titular character in the TV film, Rodgers & Hammerstein’s Cinderella. The movie was hugely successful winning an Emmy Award. Dubbed a color-blind movie, it was the first time, a black woman was portraying the famous Cinderella character.

Brandy made her feature film debut in the 1998 slasher film, “I Still Know What You Did Last Summer.” Though critically panned, it was a box office success, grossing $84 million from a budget of $24 million. She also starred in the 2016 romantic comedy film “The Perfect Match” which made $10.4 million from a $5 million budget. In 2002, Brandy ventured into reality TV making her debut with the show “Brandy: Special Delivery” which chronicled the final months of her pregnancy with her first child whom she had with her then-boyfriend and record producer, Robert “Big Bert” Smith.

Brandy served as a judge on the first season of Simon Cowell‘s talent show “America’s Got Talent” which was among one of the highest-rated shows of the year. However, due to her 2006 accident, she was unable to return for the second season. From movies and TV roles to appearances on reality television and other shows, Brandy’s filmography has at least 35 projects listed thereof. What this means is that acting has been a significant source of income for the singer.

Earning from Endorsement Deals Contributed to Her Wealth

Brandy like other stars in the entertainment industry bolsters her finance by endorsing top brands. She benefitted most from endorsement deals at the peak of her career in the late 1990s when she signed with a leading modeling agency, Wilhelmina Agency. In 1998, she endorsed Candie’s.

She became the first black singer to be the face of CoverGirl in 1999. In 2000, she endorsed DKNY while entering into a sponsorship deal with Mattell who released the “Brandy Doll”. The dolls became the best selling ever for Mattell. She represented weaves and wigs company Ultima from 2005 to 2014. All of these added to her wealth in no small manner.

Major Sources of the Singer’s Wealth

Brandy Norwood Was Once Worth $60 Million, Here’s How She Lost Much of It

After ‘Afrodisiac’, Brandy didn’t release another album until four years later when she dropped “Human” in 2008. The prolonged hiatus was partly due to an accident she had in 2006 which caused the death of another driver, a 28-year-old female named Awatef Aboudihaj.

Though Brandy wasn’t convicted of any wrongdoing, traces of marijuana found in her system after the crash opened the floodgates of lawsuits. Awatef Aboudihaj’s parents filed a $50 million wrongful death lawsuit against Brandy. This led many to speculate that Brandy had completely lost her then net worth of $60 million.

However, Brandy and Aboudihaj’s family settled out of court with the terms concealed from the public, leaving the effects on her finances mere speculation. However, it is known that Brandy paid $600,000 to two of Awatef Aboudihaj’s children. Also, Awatef’s husband rejected $1.2 million from Brandy in 2009 but later settled out of court after filing his own lawsuit requesting for money spent on medical bills.

Brandy Norwood Has Never Been Married But Has a Daughter

The beautiful entertainer has never been married but has had her share of relationships that never led to the altar. Her first but brief relationship was with the late basketball player, Kobe Bryant, whom she accompanied to his prom as a young teenager.

Then came Wanya Morris whom she described as her first love, sadly they parted ways in no time. She also dated rapper Mase briefly while they were working on the Never Say Never album. Among the many people she has been romantically linked to, the serious relationships she has had are with Quentin Richardson, Ryan Press, and Robert Anthony Smith.

An American record producer, composer, songwriter, and musician, Big Bert remains one of the most notable romantic partners of Brandy. As the story goes, the two got romantically involved during her Full Moon album.

Their relationship produced a daughter named Sy’rai Iman, who was born in June 2002. At some point, it was thought that the two were married as they were always seen together in public. Brandy and Smith, however, separated in 2003 – a year after the birth of their daughter.

Big Bert would later disclose they left people with the impression of being a married couple because Brandy was pregnant with their child and they wanted to maintain the singer’s image.

Apart from Big Bert, before Quentin Richardson got to be with Brandy, she had been romantically linked to Fredro Starr, Black C Trife, Wanya Morris, Usher, and Mase. A retired American professional basketball player, Quentin’s relationship with the famous singer started almost as soon as she parted ways with Robert Smith.

Things happened fast for Quentin and Brandy as they got engaged in July 2004. It was said that the basketball player proposed with a $1 million diamond ring. Sadly, they never got married as the relationship ended the following year. Richardson has been married to Miya Manuel since 2012.

Being a music executive, it is clear that it was work that brought Ryan and Brandy together. While it is hard to tell when they first met, it became clear they were dating in 2012. Ryan was managing Brandy’s career and in December 2012, they announced their engagement.

People were waiting on the couple to fix their wedding date when it emerged that the singer called off the engagement. It was said that the separation was an amicable one. Since then, the singer has kept her love life away from the public.

Sy’rai Iman Smith is the only child of the famous singer and she had her with Big Bert. Now a grownup and in college, it remains to be seen what Brandy’s daughter would do for a living but there reasons to believe she would take after her parents.

She has a YouTube channel where she shares her songs and was even featured in her mother’s 2020 album, B7. The Grammy award winner is possibly single at the moment, and her family life reloves a great deal around her daughter.