The Dynamics Of Anderson Cooper’s Net Worth and Gay Relationships Anderson Cooper is an American journalist, television personality, and author with a net worth of $200 million. With no formal journalistic education, Cooper became one of the most popular and phenomenal news anchors in America. He works with behemoth media houses like CNN, CBS, and ABC.

Being a media personality, Anderson has accomplished a handful of outstanding feats in journalism and has been duly awarded. He received his first Emmy Award in 1997 for coverage of Princess Diana’s funeral and, his Anderson Cooper 360° has been a recipient of at least 4 Emmy Awards. Sometime in 2005, he was also honored with a Peabody Award for his coverage of Hurricane Katrina.

In addition to his accomplishments as a journalist, other aspects of Anderson’s life often capture media attention – his wealthy background, as well as his sexuality.

Anderson Cooper’s Wealthy Background Made Him A Popular Kid

Anderson Hays Cooper was born on June 3, 1967, in New York City to a very wealthy mother, Gloria Vanderbilt, who parlayed an inheritance into a multi-million fashion empire. Thanks to his mom’s elite status, Cooper was thrust into the media at a very tender age. A celebrity baby, he had his baby photo published on Harper’s Bazaar. Alongside his mother, Cooper, 3, appeared on the Tonight Show. At the age of 8, Cooper began modeling for high-end fashion houses like Calvin Klein, Ralph Lauren and Macy’s.

He graduated from Yale University with a BA in political science in 1989. As a college student, he interned for two years with the Central Intelligence Agency. Cooper later described his CIA role as “bureaucratic and mundane.”

When he was done with college, he worked as a waiter but like his CIA stint, no career came out of it.

After exploring several career prospects, Cooper, who described himself as a news junkie settled for journalism. His choice was influenced by his brother’s 1988 suicide as he sought answers to questions about survival.

Cooper began his journalism career working as a fact-checker for Channel One. The small news network was originally broadcasted to high schools nationwide. With a fake press pass, Cooper was able to enter Burma, Myanmar where he recorded news that made it to Channel One.

As fate would have it, his little beginnings blossomed, landing him a job as an ABC correspondent in 1995. He later became the co-anchor of ABC’s overnight news program World News Now. After 4 years of hectic work in the news, Cooper decided to take a break and switched to reality TV. He became the host of ABC’s The Mole for two seasons before he returned to the news broadcast in 2001, adding a CNN job to his profile. 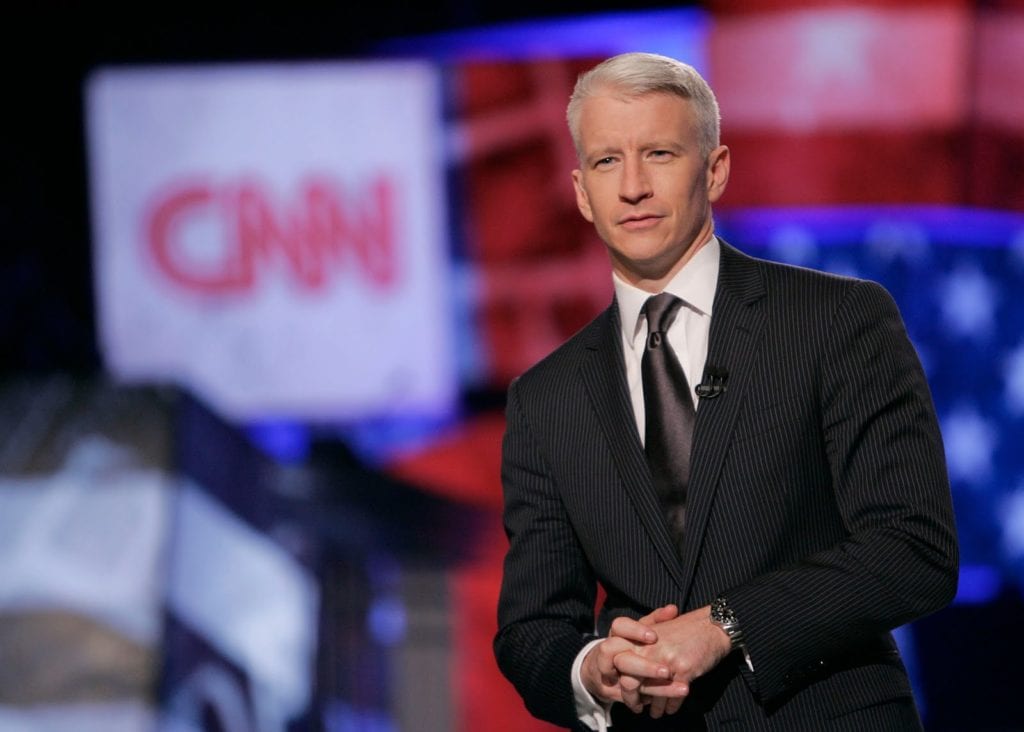 He started at CNN as a co-anchor on its American Morning. Two years later in 2003, Cooper became the anchor of his own news show Anderson Cooper 360°.

His Journalism Career Has Hugely Paid-off

When Cooper started anchoring his own news show at CNN, his salary increased exponentially from $2 million to $5 million and then $11 million in 2013. Also, he received $1 million from Harper Collins to pen a memoir about his life and work in Africa, Sri Lanka, Louisiana, and Iraq. Meanwhile, the multi-year deal he signed with CNN in 2007 allows him the freedom to work with other media outlets.

As a result, from 2007 he became a correspondent on CBS News program 60 minutes. Between 2011 to 2013, Cooper hosted the Warner Bros’ syndicated talk show, Anderson Live. From CNN alone, Cooper earns over $11 million annually.

Anderson’s mother, Gloria Vanderbilt inherited a fortune from her parents who were equally millionaires. She sustained the fortune by building a multi-million fashion empire. In the 1970s, she was said to have built the fashion empire to $100 million, years later, online sources claimed that her net worth had gone up to $200 million.

When Anderson’s mother passed away in June 2019, many online sources claimed that Anderson would inherit her $200 million fortune, thus, his net worth previously said to be in the tune of $100 million was now reported to be at $200 million. That said, if we are to go by Cooper’s words, the wealth is no way near that figure…

Growing in a wealthy family might have indirectly made Cooper’s rise to the top easier; for one, Cooper attended one of America’s most prestigious universities and never had to worry about student loans, but that he inherited $200 million from his mother seems rather ambiguous.

While Cooper’s mom grew with a silver spoon, the same wasn’t the case for his father, writer Wyatt Emory Cooper who grew up poor in Mississippi and died during open-heart surgery at the age of 50.

With increasing speculations about his share of the Vanderbilts fortune, Cooper decided to clear the air with an interview with Howard Stern in 2014.

The journalist revealed that he had always been oblivious of his maternal family’s wealth and that his mother informed him early that he’d have no part of it as there was no trust fund.

Expressing that he doesn’t believe in inherited wealth, Cooper asserted that he thinks it’s a curse and, that he’s doing fine on his own. According to him, he has never paid attention to the Vanderbilts fortune. Instead, he was attentive to the poverty his dad faced growing up in Mississippi because he believed it is healthier to his consciousness.

Again, in 2016, Cooper threw more lights on the subject during an interview with People and Entertainment Weekly. This time, he related that both his dad and mom made him understand it’s somewhat foolish to attain financial freedom through inherited wealth. To Cooper, it seems people who inherited money don’t accomplish much on their own and aren’t who they ought to be.

Even if Gloria Vanderbilt might have at some point grew her inheritance to the tune of hundreds of millions, by the 1990s, she went into financial problems, her fashion business collapsed and financial mismanagement saw her sell a couple of assets to pay off the IRS, according to Page Six.

Upon Gloria Vanderbilt’s death, her estate was valued at $1.5 million, her will revealed that her oldest son Leopold “Stan” Stokowski, will receive her Midtown co-op at 30 Beekman Place with an estimated value of $1.2 million while all the rest would go to Cooper. Judging by the fact that her entire estate was valued at $1.5 million and older son is getting $1.2 million, this leaves Cooper with barely $300,000.

So, Is Anderson Cooper really worth $200 million? Our guess is – highly unlikely. However, the popular journalist may not have that much money but he is not doing badly either with an annual earning of over $11 million.

Coming Out And Gay Relationships

It’s no longer unknown that Anderson Cooper is gay. In July 2012, he gave up on his persistent efforts to keep his private life private. Cooper sent an e-mail to Andrew Sullivan, a gay blogger proclaiming that he’s sexually attracted to men after the blogger asked him a question related to that.

In the message Cooper sent, he acknowledged that his quest to maintain his privacy on certain aspects of his personal life has given people the mistaken impression that he’s striving to hide something that makes him uncomfortable, ashamed, and afraid. Having said that, Cooper announced that he’s gay, has always been gay, and will always be gay.

He stressed that he is happy with his sexual choice, comfortable and proud. As such, it wasn’t surprising when it emerged that he was planning to get married to his long-term boyfriend, Benjamin Maisani. Cooper and Maisani had been dating since 2009 and several reports have it that Cooper’s mum helped them decide to become life partners. It was also said that she even assisted them to get things right when the relationship was strained by getting Maisani, who owns a gay bar, to do fewer night shifts and Cooper to reduce his abroad trips.

Unfortunately, the couple’s relationship still hit the rocks with the journalist confirming their split in March 2008 after rumors had made the rounds for months that their love had gone sour. Without elaborating on the reason behind their split, Anderson Cooper, who spoke to Daily Mail, revealed that they were still family to each other, still loved each other a lot, still remain best friends, and will never cease to share a great deal of their lives together.

Although Cooper never said so himself, many people speculated that Ben might have been unable to bear his tight work schedule any longer. Many believe it could be the truth owing to the fact that the TV star told People in 2017 that he is a workaholic and that his endless work-related travels were one thing that Benjamin always complained about.

Even before Ben and Cooper’s separation became official, Anderson Cooper appeared to have already moved on with someone else, a radiologist named Victor Lopez. He was first linked to Victor within the same period that rumors of his possible separation from Ben started circulating. The silver fox reportedly travelled to Dallas, Lopez’s hometown, on several occasions to spend time with him, even on Victor’s birthday.

Sometime in January 2018, he went on a business trip to New Orleans, bringing Lopez along with him and as a confirmation of the bond they shared, the latter posted a photo of Cooper in their hotel room. Subsequently, he also posted a picture of them on Instagram. Sadly, their relationship did not last for long as a mid-2019 report by Radar Online revealed that the duo had parted ways. At that time, Anderson was in mourning due to the death of his mom but Victor Lopez was not there to help him through the tough time. Victor had also been seen having a good time with another man, further proving that they were truly not together anymore.

Just when fans of the journalist were expecting to hear that he has found love in the arms of another man, the unexpected happened! He got back together with Benjamin Maisani. According to sources who revealed the news to Us Weekly, the CNN host reconciled with his former partner and they got back together, keeping things very quiet while making plans for the future.

This happened shortly before Anderson welcomed his son Wyatt on the 27th of April, 2020. The insider went on to disclose that Ben decided to sell one of his clubs and also cut down on the amount of time he works at night in order to spend more time with his boyfriend and the new baby.