Had fate willed it, Jamie Foxx would have been a footballer, who played in the NFL. But despite ending his football journey in high school, albeit, on a high note, he moved on to entertainment. First, as a comedian, then as an actor and a musician. In all of those fields, he has excelled, proving to be one of the rare multi-talented personalities in Hollywood. He is a Grammy-winning musician with several number 1 records. Jamie Foxx is also an Oscar-nominated actor, who has appeared in several movie roles over the course of his career.

In whatever form of entertainment you prefer, there is a bit of Jamie Foxx to enjoy. But for those who prefer movies, here are five roles that prove the multi-talented status of the Texas-born entertainer. Django Unchained was one of those films where even those who knew nothing about filmmaking came out of the theatre, with the feeling that something extraordinary had happened. And it was all thanks to the direction of the super director, Quentin Tarantino, and the performance of Jamie Foxx.

In the film, he played a freed slave who was on a mission to rescue his wife and enact revenge on his owner. Laced in between the expletives, violence, and gore, was a performance by Jamie Foxx that earned the film five Oscar nominations. Even for the most die-hard Jamie Foxx fan, Collateral is a film that is likely to be lost among his lengthy filmography. In Collateral, Jamie Foxx plays the role of a taxi driver, Max, who was held hostage by a hitman, played by the ever-busy Tom Cruise.

While the premise has the makings of a thriller, it is, however, more of a character study. With Jamie Foxx and Tom Cruise’s performances, the film asks the audience – what have you done with your life? with Jamie as the reference point in the movie. It was a brilliant performance by the comedian/musician, and he rightfully earned an Oscar nomination for Best Supporting Actor for his troubles. In 2004, Jamie Foxx played a lead role in the film that kept his performance in Collateral on the low. He played the iconic musician, Ray Charles, in the biographical film, Ray.

The role was a culmination of several talents in Jamie Foxx’s life as a trained pianist, a musician, and an actor. With all three skill sets in his arsenal, he delivered a portrayal of the music icon that drew applause from both critics and the audience.

The performance shot him into new heights as a musician. And he also earned several major awards for his work, including the Academy Award, SAG Award, Golden Globe Award, and Critics Choice Movie Award for Best Actor. 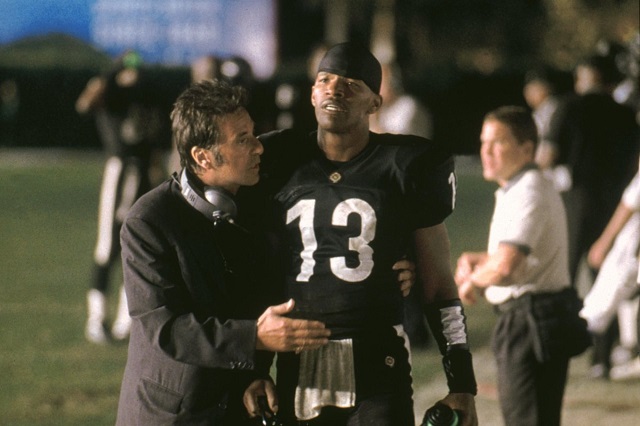 For years, Oliver Stone earned a reputation as a master of political films. But, in 1999, he took a turn to explore the makings of a professional football team.

In Any Given Sunday, he puts Jamie Foxx at the center of his story to play the role of a third-string quarterback who gets his chance to start in the team but blows it because of his inability to obey the coach’s orders.

The film was one of the first dramatic roles of Jamie Foxx’s career, and one that forced audiences and movie studios to pay attention to his work. With his filmography, it is safe to say he did not disappoint. Even for the best drama actors, comedy is always a tricky one, due to the subjective nature of what is considered funny. But in Horrible Bosses, Jamie Foxx, in his role as Dean ‘MF” Jones, achieves something rare – universal laughter.

While he was a supporting character at best in the film about three employees who plot to kill each other’s bosses, the Texas-born actor steals every scene. In his role as a career criminal who has ‘killed a bunch of people,’ he was the funniest character in the dark comedy.

See Also: 5 Kevin Hart Movie Roles That Proves He Can Do More Than Comedy

With more than 70 movies and TV shows in his filmography, Jamie Foxx has had more hits than misses. Thus, proving that he is, indeed, more than your average musician.

Nelly’s Troubles With The Law, His Relationship History, Children And Where He Is Now

The name Nelly may not easily ring a bell for the present generation but for those who grew up in the 2000s, the man...
Read more

Michael B Jordan vs Steve Harvey: Who Has a Higher Net Worth?

Unless you have been living under a rock, then you would know that the latest “it couple” in Hollywood is none other than Michael...
Read more

The year 2020 witnessed several momentous and tragic events and one that ranks right up there with the rest is the death of retired...
Read more

Some female celebrities with all the beauties and charms have flaws that even their designer shoes and dresses can't cover. From dead nails and...
Read more

Hollywood stars are always fighting to be the best at everything, and that's why they do everything possible to make headlines especially through a...
Read more

What is Kendall Jenner's net worth?
READ   How Much Is Nick Viall Worth, What Does He Do and Is He Married?
Kendall Jenner is one of the most famous people in the world right now. While still in her teens,...
Read more

Dwayne Johnson is an American-Canadian actor, producer, retired professional wrestler, and former American/Canadian football player. He has an estimated net worth of $320...
Read more
Public Figure

Every love affair has a happy beginning but that is not often the case at the end. So, it is hardly any news that...
Read more